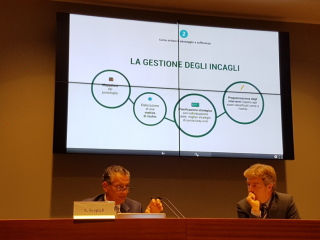 Stefano Scopigli boasts an invaluable track record, with a legacy of solid experience and training gained in the field of non performing loans with property guarantees, which is unique.

In 2010, he founded YARD Credit & Asset Management, today a leading company in the recovery and valuation of non performing loans in the property sector, in which he also currently holds the position of Chief Executive Officer. He has a leading role in some of the most important operations in the Italian market. In 2012, he contributed to the launch of the first property/non performing loans (NPL) Mixed Asset Fund in Italy, the Fondo Asset Bancari of Polis Fondi SGR, and a subsequent three funds.

Stefano’s philosophy, which is also the core vision of YARD Credit & Asset Management, is focused on upgrading the simple distribution of services, too often arising from the need to find rapid and effective solutions for the elimination of a problem, to the building and development of actual processes, simply focused on the creation of value in every phase of a credit life cycle, completely turning around the prospect into a scenario of opportunity and growth.

His expertise, notably consolidated and developed over the years, began to form at the end of the ‘80s when became a Consultant with SIB (Servizi Immobiliari Banche), a Property Banking Service company qualified in property consultancy and credit management – the first in Italy to launch processes of NPL securitization with property guarantees, obtaining notable ratings from the most important credit evaluation agencies such as Standard & Poor’s and Moody’s & Fitch.

Nearly twenty years’ experience with SIB saw Stefano engage in intense research activities aimed at developing new methods, procedures, processes and strategies. He participated as an Advisor in the first securitization of a portfolio of residential mortgages in Italy, for the Istituto San Paolo of Turin, in the role as seller.

The impetus continued towards ever more complex and articulate models in the credit market, and led him towards great accomplishments. In 2004, he was Manager of the Rome branch of Pirelli Credit Servicing, one of the leading companies amongst independent servicers in the management of non performing assets. Even in this role, Stefano became a sought after spokesperson for both Italian and international credit institutions and high profile investors, to such an extent that, after only two years, he was appointed Director of the Large Corporate Assets Division.

Techniques and strategies of NPL’ acquisition and management
StopSecret, Milan

Reforms of the guarantees on securitization of non performing loans: proposals and scenarios
Chamber of Deputies, Rome

The opportunities arising from the management and the recovery of mortgage loans
Il Quotidiano Immobiliare, Milan

Legal and financial profiles of the management of distressed asset
AGIDI, Milan